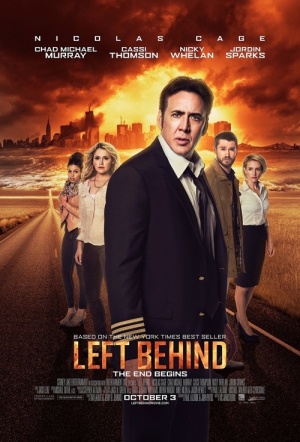 Nicolas Cage stars as airline pilot Ray Steele in this faith-based, doomsday thriller about the biblical Rapture where millions of people instantly vanish without a trace. Those left alive are like "Whaaaaaaaaaaat?". Helmed by Vic Armstrong, director of the 1993 Dolph Lundgren "classic" Army of One, this has been widely panned by critics.

Says the official synopsis: "The instant vanishings cause unmanned vehicles to crash and burn. Planes fall from the sky. Emergency forces everywhere are devastated. Gridlock, riots and looting overrun the cities. There is no one to help or provide answers. In a moment, the entire planet is plunged into darkness..."

Cheap-looking, overwrought kitsch of the most unintentionally hilarious order.

A shoo-in to clean up at the next Razzie Awards.