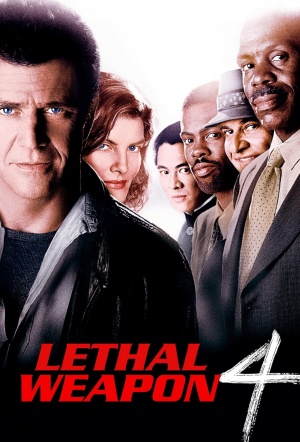 In the fourth and final installment in the Richard Donner-directed buddy-cop action series, Lethal Weapon 4 brings Mel Gibson, Danny Glover, Joe Pesci and Rene Russo back together in their roles, this time on a mission to take down Asian crime boss Way Sing Ku (Jet Li in his U.S. film debut).

Maverick detectives Martin Riggs (Gibson) and Roger Murtaugh (Glover) square off against Asian mobster Wah Sing Ku, who's up to his neck in slave trading and counterfeit currency. With help from private eye Leo Getz (Pesci) and smart-aleck rookie cop Lee Butters (Chris Rock), Riggs and Murtaugh must take down Ku and his gang.

It matters little that the film is rife with non sequiturs, nonsense and nihilistic violence, because its heroes are so darn buoyant and charming.

Pardon me for having groaned in anticipation of what, in the full perspective-warping heat of the summer movie season, turns out to be one of the nicer blow-'em-ups around.

Lethal Weapon 4 has all the technical skill of the first three movies in the series, but lacks the secret weapon, which was conviction.

There's no plot worth describing, no repartee wittier than 'Oh shut up,' no acting moments that rise above the level of posing.

While the action interludes are impressively staged and edited, they strain for originality...