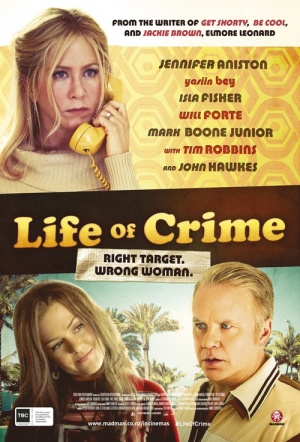 Reprising the characters played by Samuel L. Jackson and Robert De Niro in Quentin Tarantino’s Jackie Brown, this prequel set 15 years earlier sees Mos Def and The Sessions' John Hawkes pair up to kidnap the wife (Jennifer Aniston) of a wealthy developer (Tim Robbins). Their ransom demands fall on deaf ears though when they discover she is unwanted by her unfaithful husband...

Ordell Robbie (Mos Def) and Louis Gara (Hawkes) hit it off in prison, where they were both doing time for grand theft auto. Now that they're out, they're joining forces for one big score. The plan is to kidnap the wife of a wealthy Detroit developer and hold her for ransom, but they didn't plan on the lowlife husband not wanting her back. So it's time for Plan B and the opportunity to make a real killing - with the help of a beautiful, ticked-off housewife who's hungry for a large helping of revenge.

Based on the 2002 novel The Switch by Elmore Leonard, who also penned Get Shorty, Out of Sight and, of course, Jackie Brown.

You have to hand it to writer/director Daniel Schechter. Although a legitimate Elmore Leonard adaptation in its own right, Life of Crime feels more like a cheeky Quentin Tarantino prequel because its main characters, clueless crooks Ordell Robbie (Mos Def), Louis Gara (John Hawkes) and Melanie (Isla Fisher), all appeared in Jackie Brown. Which takes some serious chutzpah.

Aniston brings poignancy to her role as a kidnapped wife whose husband (Tim Robbins) isn’t too fussed about her freedom.

This one belongs to the women: As a gold-digging mistress, Isla Fisher does half-smart expertly, while Jennifer Aniston demonstrates her underrated timing as a wealthy kidnapping victim turned confidante.

It gleams with a faintly-tacky, country club sheen, as if it'd been sheep-dipped in essence of 70s and come out feeling peachy.

A solid, middle-of-the-road Leonard adaptation that lacks the singularity to be something more.

Starts promisingly and ends with a smile but underwhelms in between.

Missing the punchy plotting of the Coens thriller it resembles, the early chuckles don't quite translate into a satisfying whole.