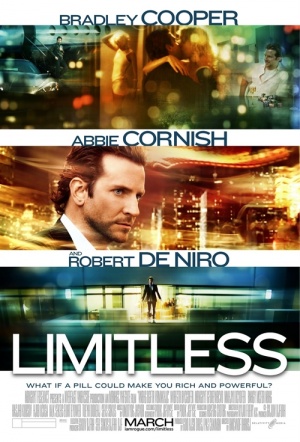 An action-thriller about a writer (Bradley Cooper, The Hangover) who discovers a top-secret drug which bestows him with super human abilities.

Out-of-work writer Eddie Morra's (Cooper) rejection by girlfriend Lindy (Abbie Cornish, Bright Star) confirms his belief: he's a loser. But an old friend introduces Eddie to 'MDT', a designer pharmaceutical that makes him laser focused and more confident than any man alive. Now on an MDT-fueled odyssey, everything Eddie's read, heard or seen is instantly organized and available to him.

As the former nobody rises to the top of the financial world, he draws the attention of business mogul Carl Van Loon (Robert De Niro), who sees this enhanced version of Eddie as the tool to make billions. But brutal side effects jeopardize his meteoric ascent. With a dwindling stash and hit men who will eliminate him to get the MDT, Eddie must stay wired long enough to elude capture.

The ultimate you-can-have-it-all fantasy -- a pill allowing users to harness 100% of their brain power -- turns into something close to a nightmare for a rags-to-riches author in the propulsive, unexpectedly funny thriller "Limitless." Director Neil Burger ("The Illusionist") and screenwriter-producer Leslie Dixon ("Hairspray") take a joint leap into different genre territory, mixing Tony Scott's dazzle and Martin Scorsese's Gotham darkness, with just a few stumbles along the way...

Drug addiction’s a blast in this slick brain-fable. Beware though: plot holes and underdeveloped characters could leave you with a comedown.

Limitless should be so much smarter than it is.

Fine cast and premise sullied by soulless handling. Frustratingly limited in its power to entertain and engross.

It's a funny time of year. The Oscar bait has all floated downstream, but the North American summer season is yet to open. For a couple of months, the multiplex is awash with all sorts of odds and ends.