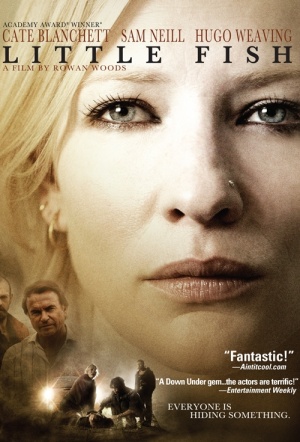 Cate Blanchett is an ex-junkie looking for a fresh break in this redemptive, working-class crime-drama, the second feature from Sydney filmmaker Rowan Woods (The Boys). Co-stars Sam Neill, Hugo Weaving and Martin Henderson.

Wanting to turn her life around and to redeem herself in the eyes of her overworked single mum (Noni Hazelhurst), Tracy (Blanchett) vows to open her own business. But raising funds proves complicated and when three men from her past reappear with their own plans, Tracy becomes embroiled in a drug deal.

A superior working-class meller from Down Under, blessed with stellar performances, especially by lead Cate Blanchett.

It's a sober, sensitive film about degrees of dependency, grief, guilt, recrimination and recuperation.

Blanchett sinks into the role of a recovering drug addict in a thorny, compelling drama from Australia.

A canny mixture of social drama and crime thriller.

Fish finally puts its pieces together, unravelling the story strands in a dramatically resonant third act where the film finally lifts itself out of the doldrums.