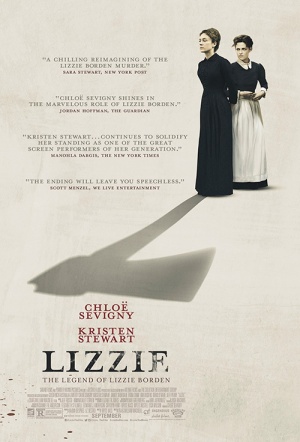 Kristen Stewart and Oscar nominee Chloë Sevigny star in this Sundance Grand Jury Prize-nominated psychological thriller based on the 1892 murders of the Borden family.

"1892: Headstrong Lizzie Borden lives with her wealthy father, stepmother, and sister in Fall River, Massachusetts. Lizzie lovingly tends to her pet pigeons and is occasionally allowed out of her dimly lit, foreboding house, but otherwise lives under strict rules set by her domineering father. When her family hires live-in maid Bridget, an uneducated Irish immigrant, the two find kindred spirits in one another. Their friendship begins with covert communication and companionship that blossoms into an intimate relationship. Meanwhile, tension builds in the Borden household, and Lizzie’s claustrophobic existence becomes increasingly more oppressive and abusive, leading to its inevitable breaking point." (Sundance Film Festival)

…the central performances from Sevigny and Stewart anchor the piece and the eventual reenactment of the bloody crime is certainly visceral and effective.

The problem is the enervated pacing and ludicrous depiction - after much fancy skipping back and forth in time - of the murders themselves.

It's a simple story made to rouse modern hearts, and the performances and cinematography are so good, the film nearly pulls off the trick.

Ms. Sevigny's intelligence and formidable control keep the melodrama grounded. Her empathy for Borden, whose fragile constitution belies a searing will, is palpable, as is the sense of inescapable peril surrounding the two female leads.

The element of horror is treated circumspectly, almost dispassionately, as if to douse its mythic element in as much cold reality as possible.

It could use an operatic high note, or even a truly deep dark night of the soul, some oscillation in the levels. But the film reflects the evenness with which Sevigny portrays the unflappable Lizzie, cool as a cucumber all the way to court.

Unfortunately, the film never quite crosses that line into campy territory, merely teasing what a less serious treatment of Lizzie's story might look like.

A sensitive and stylish take on the legend.