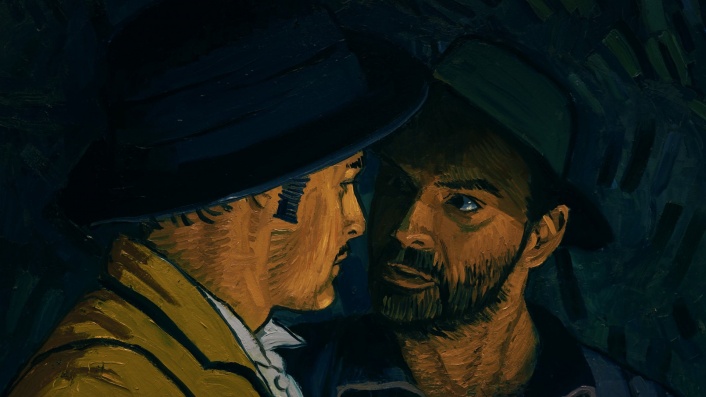 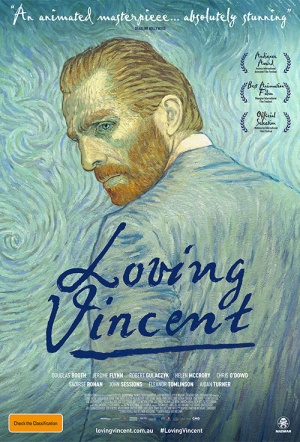 Hand-painted animated drama about the life and mysterious death of Vincent Van Gogh. The film uses a new oil painting for each shot, with movement added from one frame to the next by a painter’s brush. Around 100 artists have been involved in the film, and in the process have composed more than 56,000 paintings.

Critics can no longer describe a film as “a painting come to life!” This musing on Vincent van Gogh owns that metaphor now, and unless we see another feature made from tens of thousands of actual paintings, it’s going to stay that way. Opening with a shot of the crescent from The Starry Night, the moonlight proceeds to move and rotate in the way that painting suggests. Imitating van Gogh’s style isn’t something to marvel at, but to see it interpreted in animation is. This film is a visual astonishment and it would’ve been a damn shame if filmmakers Dorota Kobiela and Hugh Welchman fudged the opportunity.

Brings a poetic sense of tragedy to the last act of van Gogh's life, and fresh insight into the kind of man he was.

Despite dialogue and accent issues, this is a breathtaking homage to van Gogh. There has never been a film like it.

As the story limps and drags, the viewer also becomes accustomed to the images, and astonishment at the film's innovative, painstaking technique begins to fade. But its charm never quite wears off, for reasons summed up in the title.

Here is an oddity: intriguing and yet weirdly exasperating, like a sentimental tribute, or a one-joke epic, or a monomaniacal act of stylistic pedantry.

A paean and requiem for a talented artist taken before his time.

The beautiful visuals, unfortunately, can't hide a screenplay which feels at times trite and stagey.

Perhaps because expressions are so smudged and movements so weightless, the wonders of Loving Vincent don’t really extend past its magical aesthetic. But what wonders they are.

Animating Van Gogh's bold impasto, already kinetic on the canvas, could have been merely superfluous. As moving pictures, though, the brushstrokes have an unexpected pull in this uneven but deeply felt homage.

People interested in what cinema can do should go and see it.

A triumph of painstaking technical prowess and stunning visuals over storytelling and dialogue. See it for its nuanced take on a huge cultural figure and to applaud its astounding audacity. Loving Vincent is available to stream in New Zealand now on Google Play and Apple TV and Academy On Demand and AroVision.