What was done, was done well.

The world of William Shakespeare can be a tricky road to navigate, especially if you are not educated in his tediously difficult language that awaits you when embarking on one of his many plays. If you are neither a thespian or English literature graduate (which I am clearly not), you will struggle to understand the famous playwright's narrative. It could be easier to learn French or German at a five week course than it is to study what Shakespeare is actually trying to say. I have seen only two of the Elizabethan writers plays; the tragic love story of Romeo and Juliet and the puzzling comedy, A Midsummer night's Dream. Both times I came away scratching my head, trying my best to piece together what had actually taken place, but through all this confusion, I still found myself enjoying the foreign stories that were being presented to me. This is why I was drawn to another of Shakespeare's great tragedies, even though I knew that I would be sitting through nearly two hours of theatre without out having any idea of what is being said in the dialogue.
Macbeth is a well known story of ambition, murder, rage and tyranny but what I was looking for in Justin Kurzel's interpretation was a connection that an uneducated sloth like myself could get from a tale that had four hundred years of retelling. I wanted to feel the character's emotions and visualise the bloody world of 11th century Scotland. I wanted to know why this is such a tragic tale of blind ambition and lust for power. But more importantly I wanted some sort of tangible belief in the performances of the leading actors that could help me to understand this famous and sad story.
Kurzel knows his audience well and because of this he has directed one of the greatest telling's of Shakespearean theatre I have ever witnessed. His brutal and bloody visual world creates an authentic atmosphere that never deserts the viewer, allowing the story to illustrate itself effortlessly across the screen. Half the battle is won. Accompanied by an extremely outstandingly appropriate score and the scene is set for a film that would not look out of place amongst the very best of the years releases. The eerie and sombre acoustics help in keeping the audience fixed to their sits as the tragedy of Macbeth unfolds in front of us.
Michael Fassbender (Macbeth), plays the character to perfection and it is his performance alone that makes it easier for the common man to understand Shakespeare's unique language. Fassbender is thoroughly engaged in his role with every word oozing with emotion. Marion Cotillard is equally impressive as the conniving Lady Macbeth. Cotillard was an interesting choice to play the femme fatale, but she has proven here that she can accomplish any challenging role that is given to her by adding another feather in a cap that is full of memorable characters. Her interpretation of Lady Macbeth helped me realise that she had become somewhat of a victim to the King she had created. Adding to the list of brilliant performances is Sean Harris who plays the vengeful Macduff who is hell bent on ending Macbeth's reign as a tyrannous Monarch. Great little cameos by David Thewlis (King Duncan) and Elisabeth Debicki (Lady Macduff) along with the superb visionary direction by Justin Kurzel gives the uneducated hordes a chance to experience one of William Shakespeare's masterpieces. 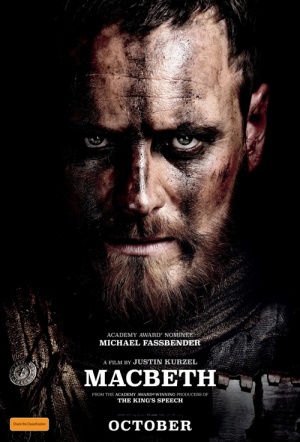