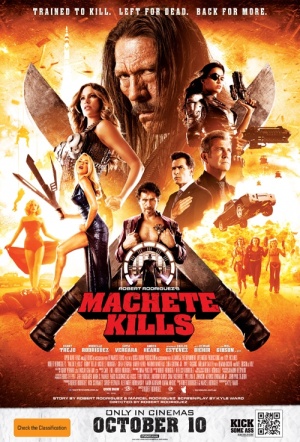 I admire Robert Rodriguez' approach to making movies. He shoots quickly, works off the cuff and pulls off the sort of casting that makes you think he's probably a fun guy to be around. His films aim to be fun too and when his technique works you end up with something great like Sin City. Sometimes though, you end up with a damp squib like Machete Kills.

As violent as its predecessor yet noticeably duller and less outrageous, Machete Kills is dragged to the finish line entirely by its director’s madcap energy and an absurd cast of major stars in strange cameos.

Like a meal made entirely of chillies, Machete Mk II is spicy to start with, then unpleasant, then numbing - before it all starts to repeat.

Much as we want to relish the shameless parade of cartoon violence ... the soggy plotting and slack comic timing are downers.

Until your eyes glaze over after about a half-hour, "Machete Kills" might put a twisted smirk of guilty amusement on your face.

The odd vivid shot reminds you of Rodriguez's dynamic visual imagination, but also what it's wasted on here: a project as indifferent as some of the trash that inspired it.

Machete may kill, but on the second time around his repetitious, deadpan brand of humor really doesn't so much.