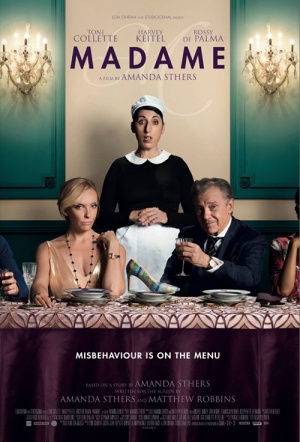 Toni Collette, Harvey Keitel, Rossy de Palma and Michael Smiley lead this romantic comedy about an unexpected love affair that starts at dinner and spreads to the Paris streets.

"Anne (Collette) and Bob (Keitel), a wealthy, well-connected American couple, move into a manor in Paris. While preparing a luxurious dinner for sophisticated international friends, Anne discovers there are only 13 guests. So, she insists her loyal maid, Maria (Almodóvar regular Rossy de Palma; Julieta), disguise herself as a mysterious Spanish noblewoman to even out the numbers. Too much wine and some playful chat lead Maria to endear herself to a dandy British artbroker (Smiley). Their budding romance soon has Anne chasing her maid around Paris, reinventing the truth and finally plotting to destroy this most unexpected and joyous love affair." (Sydney Film Festival)

The premise is fun and the Paris setting gorgeous, yet this would be Cinderella story with a twist prickles with contrivance.

[Toni Collette] makes the audience believe rich people problems are worthy of sympathy, even if the character in question is far from likeable.

Bogged down by blatant stereotypes, wan banter, obvious observations about the intersection of class systems, and rote wisdom about having the strength to be yourself and forge your own path.

Madame doesn't quite hit the level of biting satire. But it says enough about the haves and have-nots to be substantial in its portrayal of affected candy-coloured opulence.

Enter at your own peril. And also be warned that Collette issues one of the few complete performance misfires of her career with a very loud bang.