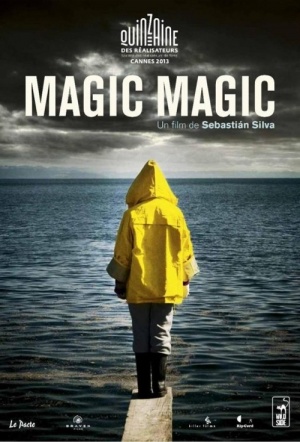 "If Alicia could just get some sleep, everything would be all right. As she and her cousin Sarah make their way through rural Chile with Sarah’s boyfriend, his sister, and their strange American friend Brink, Alicia’s insomnia slowly takes control. The difference between what is happening in reality and what is happening in her own mind becomes less and less clear. After she takes a stab at hypnosis to help solve the problem, things only get worse. As her waking nightmare continues, will her “friends” be her salvation or her downfall?" (Sundance Film Festival)

Meticulously acted, gorgeously shot and hilariously insightful about the strange, inarticulable ways people can get on one another's nerves.

Silva's skill is allowing us to experience everything through the point of view of his protagonist, although things become tedious in the final reel.

The script unsettles, but never scares, so it doesn't work as a horror film. It's also not a convincing chronicle of deteriorating mental illness.

Functions well as a Chilean twist on Repulsion, becoming one of those rare psychological thrillers that doesn’t skimp on the psychology part.