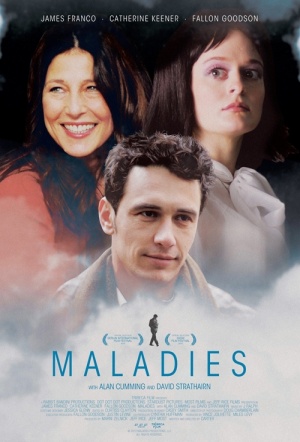 Idiosyncratic drama starring Catherine Keener and James Franco. A successful actor, who has retired at a young age due to a perceived mental illness, moves to the small seaside town of his equally deranged sister. The second film from mono-named painter and sculptor, Carter.

"James (Franco), a former actor who along with his sister Patricia (Fallon Goodson) retreats to the home of his best friend, the artist Catherine (Keener). Here, James' grasp on reality remains tenuous at best as he attempts to redefine himself creatively through his new passion, writing. Through Catherine's care, kindred eccentricities and friendship – along with the creative sanctuary her seaside home provides – we chart the fragments of James' struggle with reality and the everyday conflicts with those who matter to him most." (SXSW Film Festival)

Though there's certainly some interesting bits and pieces here, Maladies should not be mistaken for the pop-culture surrealism of the likes of Being John Malkovich... basically a studied and serious film, but there's a feyness to its tone, and a lethargy to its pacing.

Not sick, just too dull and pretentious for public consumption.