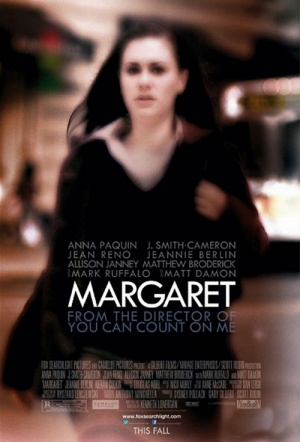 Drama about a high-school student in New York who inadvertently plays a role in a traffic accident that claims a woman's life. Stars Anna Paquin, Matt Damon, Mark Ruffalo and Mathew Broderick.

Certain she is responsible, 17-year-old Lisa (Paquin) attempts to set things right but her life spins out of control, as she is confronted with a basic truth: that her youthful ideals are on a collision course against the realities and compromises of the adult world.

Margaret, written and directed by Kenneth Lonergan (the playwright's second film after 2000's excellent You Can Count on Me), has had a controversial path to release. Shot in 2005, Lonergan has delayed the film's release since, reportedly grappling with the final cut for over five years. Two lawsuits resulted between the director, producer and studio Fox Searchlight.

This unwieldy drama of conscience in the wake of tragedy is hyperarticulate but rarely eloquent.

Filmed in 2005 and has reportedly been delayed because of persistent editing problems. These do not seem to have been solved.

Paquin creates that rarest of things: a profoundly unsympathetic character who is mysteriously, mesmerically, operatically compelling to watch.

Margaret comes apart at the seams as you watch it, but it gives off a lovely light. Seek it out. You can thank me later.

Lonergan has created a forceful yet extremely fitful film that teases with moments of brilliance only to frustrate in the end.

Haunting and thought-provoking despite flaws; an important post-9/11 movie with its own troubled mythology.

Nearly every scene is acutely observed, a strong cast fully inhabiting Lonergan's symphonic collision of ideas and in tune with his ear for the harsh poetry of New York language, variously hyperbolic and sparing, engaged and self-protective.

Knotty, ambitious and trading in messy human truths, it’s the work of a master dramatist. Here’s hoping Lonergan’s next one reaches us a little faster.