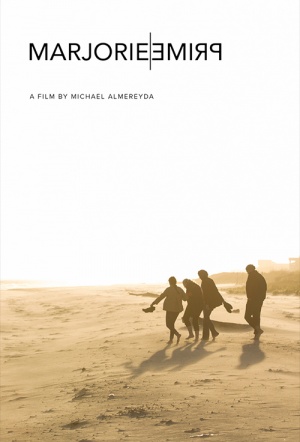 "Eighty-six-year-old Marjorie (Smith) spends her final, ailing days with a computerised version of her deceased husband. With the intent to recount their life together, Marjorie’s “Prime” relies on the information from her and her kin to develop a more complex understanding of his history. As their interactions deepen, the family begins to develop ever diverging recounts of their lives, drawn into the chance to reconstruct the often painful past." (Sundance Film Festival)

There is a clever idea here... But the cleverness becomes chatterboxed to death.

An elegant, absorbing and stimulating experience.

Michael Almereyda’s film is so subtly smart, and veiled in such layers of suggestion, that you need to be on your toes from the beginning.

As a sly chamber piece, it reassures and unsettles in equal, exquisitely calibrated measure.

Like the play by Jordan Harrison it's based on, writer-director Michael Almereyda's film is small in scale, but pulls us in close with its provocative setup.

Hamm perfectly plays Walter as a sort of suave, GQ version of HAL 9000, and Davis and Robbins have their most satisfying feature film roles in years.

Leave it to Michael Almereyda to make a science fiction movie that consists of little more than scenes of two characters talking in plushly appointed living rooms.

The movie lacks ostentation; it appears so simple and unworldly and unhip that one wants to protect it.

Marjorie Prime is very much a chamber piece with flashes of cinematic brilliance.

A seamless, unshowy weave of chamber piece and speculative fiction...

There's more going on in this movie's 90-plus minutes than in many summer blockbusters nearly twice its length.

Much of the fun of Marjorie Prime is in figuring out where it's going, and why.

Marjorie Prime in itself feels not unlike Walter’s hologram - almost real and almost human, but not quite flesh and blood.

Though visually spare and undistinguished, the movie gets revelatory mileage out of Geena Davis...

One leaves "Marjorie Prime" pleased to have witnessed these actors at work, and rather wishing you'd got to see them tackle this intimate piece in a warmer, flesh-and-blood theatrical context.

Marjorie Prime is both a sophisticated chamber drama and a captivating contemplation of time, memory and mortality.

This is the rare recent stage-to-screen adaptation that actually improves on the source.