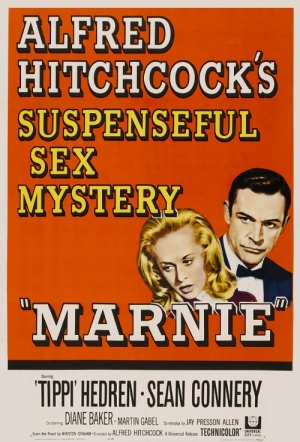 Alfred Hitchcock psychological thriller. The director’s favourite leading lady, Tippi Hedren, is the deeply troubled Marnie - a compulsive thief and liar - and Sean Connery is the man who tries to save her.

Marnie goes to work for Mark's publishing company, then attempts to rob him. Instead of going to the police, the smitten Mark blackmails her into marriage. As he investigates Marnie’s obsessive behaviour, their hasty marriage quickly disintegrates. After she attempts suicide, Mark forces Marnie to confront her past in a shattering conclusion. Based on the novel of the same name by Winston Graham.