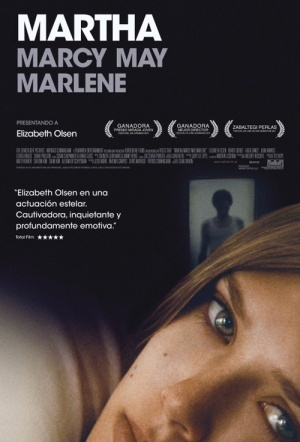 Psychodrama, winner of the Directing Award (Dramatic) for first time writer/director Sean Durkin at Sundance 2011, stars Elizabeth Olsen (sister of Mary-Kate and Ashley) as a fragile young woman who escapes from a creepy, Manson-like cult and their charismatic leader (John Hawkes).

She takes refuge at the Connecticut home of her estranged, uptight sister Lucy (Sarah Paulson). When her memories trigger a chilling paranoia, Martha starts to believe that the cult is pursuing her, and the line between reality and delusion blur.

The largely elliptical script feels a few drafts shy of focus, with the thriller elements undermining the juicier questions of why one joins a cult and how life can go back to normal later.

A stunningly assured, elegantly crafted and profoundly disturbing portrait of a traumatised mind. Rockets Durkin and Olsen to the top of the ‘ones to watch’ pile.

A bit too coy, too clever and too diffident to believe in.

A bit too coy, too clever and too diffident to believe in.

Ambitious and effective, introducing a gifted young actress and a director whose work I'll anticipate.

A film of rough edges and no easy answers, nearly perfect in its imperfection.

Too ambiguous for some tastes, this is grim but clever, insidiously creepy and affecting. And in Olsen and Durkin, it marks the arrival of two exciting talents to watch. It still should be called Mental Sex Cult.