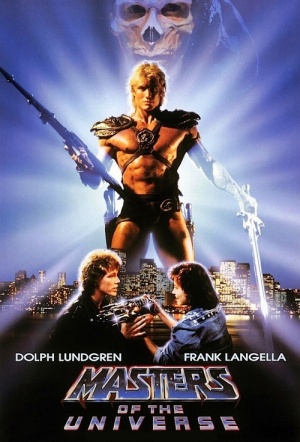 Science fantasy, based on the massively popular Mattel toy range, with Swedish action hero Dolph Lundgren as prince warrior He-Man. He-Man's on-going battle with the evil Skeletor (Frank Langella) moves from Eternia to Earth when a 'Cosmic Key' at the centre of their war is used to open a gateway to California.

Director Gary Goddard took inspiration from the work of comic book writer-illustrator Jack Kirby. Goddard has stated: "The storyline was greatly inspired by [Kirby's] classic Fantastic Four/Doctor Doom epics, The New Gods and a bit of Thor thrown in here and there. I intended the film to be a 'motion picture comic book', though it was a tough proposition to sell to the studio at the time. 'Comics are just for kids,' they thought. They would not allow me to hire Jack Kirby who I desperately wanted to be the conceptual artist for the picture."

There are lots of flashes and bangs, but the effects are neither special nor camp enough to be more than vaguely amusing.

Their weapons make a Fourth of July sparkler show, but they almost never hit anybody.

The first film to be based on a line of toys, this might not be the last, but it'd take something awful to replace it as the worst.