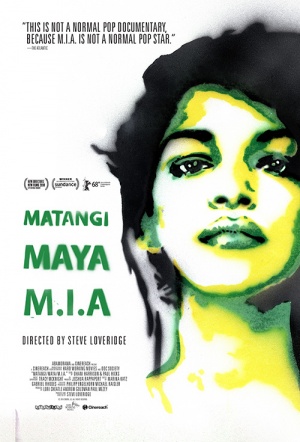 "M.I.A. created a mashup, cut-and-paste identity that pulled inspiration from every corner of her journey: a sonic sketchbook that blends Tamil politics, art school punk, hip-hop beats, and the voice of multicultural youth. Maya kept the camera rolling through her battles with the music industry and mainstream media as her success and fame grew around the world. Filmmaker and longtime friend Stephen Loveridge situates us inside the personal process of one of the most provocative and divisive artists working in music today." (Sundance Film Festival

It's a film as compellingly all over the shop as its subject, even if it doesn't quite have her beat on stylistic verve and risk.

The film comes from a place of deep admiration for MIA, but unlike more fawning biographies, it makes a convincing case that this admiration is well earned.

What distinguishes Matangi/Maya/M.I.A. from the crowd is its extensive access to the controversial artist, and the strong impression that she isn't terribly likeable, nor terribly keen to be liked.

Furiously alive with M.I.A's unwavering spirit, and makes excellent use of her thrilling, worldly music.

Inspires deep respect for the fierce and independent artist she is.

The director and subject struggle to say everything about globalism, fame, identity and whatever else comes into their heads, until the film is at risk of saying nothing much at all.