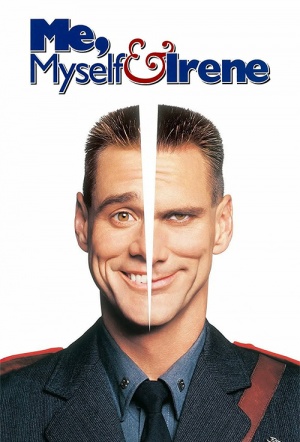 Farrelly Brothers' shock comedy starring Jim Carrey as a nice-guy cop with dissociative identity disorder who must protect a woman on the run (Renée Zellweger).

Charlie Baileygates (Carrey), a 17-year Rhode Island police force veteran, is mild-mannered, hard-working, helpful, and a devoted and loving father. Unfortunately, Charlie has Split Personality Disorder, and when he runs out of his medication he becomes his hyper-aggressive, alcohol-sodden, sex addict alter-ego, Hank. Both personalities fall in love with Irene, (Zellweger), an alleged fugitive that Charlie is tasked with escorting to upstate New York.

Me, Myself & Irene / Reviews

Funny as much of the action is, however, the approach feels rather less fresh, and the gross-outs seem more gratuitous.

If you choose to see this puerile tripe, check your dignity at the door.