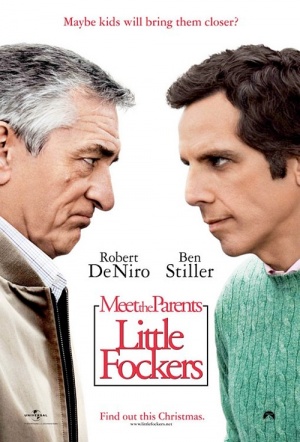 The third film in the Meet the Parents series is set 10 years later, when Pam (Teri Polo) and Greg (Ben Stiller) Focker have had two little Fockers.

Greg is finally getting "in" with his tightly wound father-in-law Jack (Robert De Niro). But, strapped for cash, he takes a job moonlighting for a drug company and Jack's suspicions are aroused. When the entire clan - including Pam's ex (Owen Wilson) - descends for the twins' birthday party, Greg finds himself forced to prove he's fully capable as the man of the house. With all the misunderstandings, spying and covert missions, will Greg pass Jack's final test and become the family's next patriarch... or will the circle of trust be broken for good?

A lazy attempt to milk a few more laughs and bucks from the enormously lucrative property spawned 10 years ago by "Meet the Parents."

Apparently, because all the good jokes were used up in the first two "Fockers" movies, the wisenheimers behind the latest installment in this unnecessary trilogy decided to bring in some spew, opening a sick toddler's mouth like a fire hydrant and letting it rip.

Clearly nothing but a paycheck project for all concerned, this is definitely the least and hopefully the last of a franchise that started amusingly enough a decade ago but has now officially overstayed its welcome.

With all these folks in the same movie, there are inevitably moments when Hoffman or Wilson get a laugh, but on the whole it’s the same again but weaker and with fewer good jokes. We’re too tired of the gag even to think of a ‘focker’ line to sign off the review.