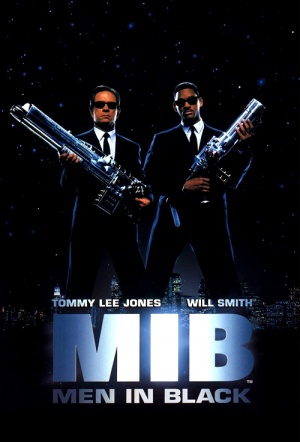 Tommy Lee Jones and Will Smith are the Men in Black, "protecting the earth from the scum of the universe", in Barry Sonnenfeld's (Get Shorty) 1997 sci-fi comedy.

The MiB is a highly secretive government agency, tasked with policing the comings and goings of extra-terrestrials on planet Earth. Their identities erased, MiB agents wear nondescript black suits and sunglasses and have alien-level technological weapons at their disposal. Smith is Agent J, a wisecracking new recruit and former New York cop, and Jones is Agent K, his partner and MiB vet. They are assigned to recover an item stolen by an alien terrorist (Vincent D'Onofrio), an item which they learn controls the future of our galaxy.

A box office smash (bringing in $US590 million worldwide on release), Ray-Ban has stated that sales of their Predator 2 sunglasses (worn by the agents to deflect their memory-erasing neuralyzers) tripled to $US5 million after the movie's release.

A witty and sometimes surreal sci-fi comedy, Men in Black is a wild knuckleball of a movie that keeps dancing in and out of the strike zone.

A lean, punchy, fast paced, and extremely endearing sci-fi action comedy - basically Ghostbusters with aliens - packed with irreverent jokes, boasting two great central performances, and overloaded with hilarious aliens. The only weakness: there's not much plot, and when it does finally kick in the film slows down a tad.

When the plot finally does click in, it slows down the trajectory a little, but not fatally.

A genially twisted riff on the familiar alien invaders story, a lively summer entertainment that marries a deadpan sense of humor to the strangest creatures around.

Sci-fi with a sense of humour. Cool slick and very very funny.

Deserves credit for supplementing its special effects with a breezy script and genuinely charismatic performances by Will Smith and Tommy Lee Jones.