Merata: How Mum Decolonised the Screen 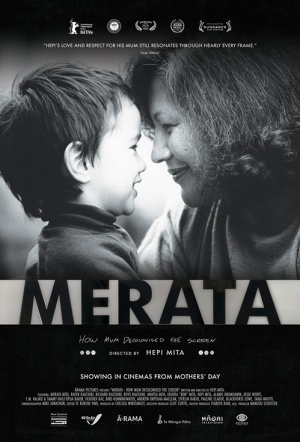 Merata Mita, landmark Māori filmmaker behind Patu! and Mauri, is honoured in this personal portrait from her son Heperi. The world's first indigenous woman to direct a feature film, Merata was also a fearless documentarian and outspoken activist—and for many years a solo mum bringing up her kids. Heperi revisits her films and whānau to look back on Merata's life and her impact on those around her.

"By the time the pioneering indigenous filmmaker and activist Merata Mita died suddenly in 2010, she had packed an extraordinary amount of action into her 68 years. If her youngest son Heperi Mita became a film archivist and a filmmaker in order to discover the stories she did not live to tell him, then we in Aotearoa have something new to thank her for. His first film is a remarkable accomplishment, a compelling Great Woman portrait that speaks intimately from personal experience.

"He has an abundant archive of film and TV appearances to draw on, beginning with his mother’s mesmerising testimony as a Māori woman bringing up children alone in the 1977 TV documentary Māori Women in a Pākehā World. By 1979 she was making landmark documentaries herself, most notably Bastion Point: Day 507 (1980) and Patu! (1983) which rattled Kiwi complacency by so clearly identifying the violation of Māori rights – the latter film explicitly tying New Zealand’s record to apartheid in South Africa. In 1988 her film Mauri, deftly quoted in this one, was the first feature written and directed by a Māori woman." (New Zealand International Film Festival)

The more personal this historically essential doco gets, the more universal it becomes.

As Miti successfully makes us appreciate his mother's passions and progress, it's strange to see something so personal packaged like a lecture.

A portrait of an icon of Indigenous cinema as directed by her son.

Though Merata never shies away from the more uncomfortable realities of its subject's life - broken marriages, poverty, clashes with the authorities, and so on - Hepi's love and respect for his mum still resonates through nearly every frame.