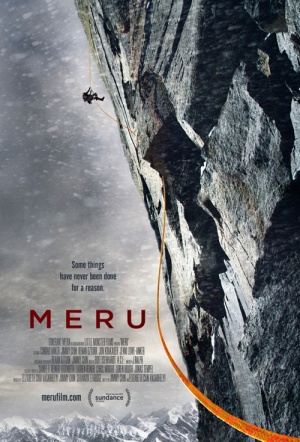 Sundance-winning adventure documentary following three big wall climbers as they attempts to scale one of the Himalayas' most challenging ascents – Mount Meru.

"Rising above the headwaters of the sacred Ganges River in Northern India, the magnificent Shark's Fin of Mount Meru is a 21,000-foot peak stacked with so many obstacles that it's both a nightmare and an irresistible siren call for the world’s toughest climbers... Meru is the electrifying story of three elite American climbers—Conrad Anker, Jimmy Chin, and Renan Ozturk—bent on achieving the impossible. On their first attempt in 2008, the trio battles 19 days of violent storms and sub-zero temperatures, teetering on a portaledge night after night, only to be beaten back 100 meters from the top. Returning home, a series of disasters, losses, and doubts seriously test their dream of one last try." (Sundance Film Festival)

An ultrasmooth blend of conventional documentary techniques - the talking-head interview; the back-in-the-day photograph - and uncommon ambition.

It is the personal struggle of each of the climbers, and the candid way they talk about them on camera, that give this film its considerable impact.