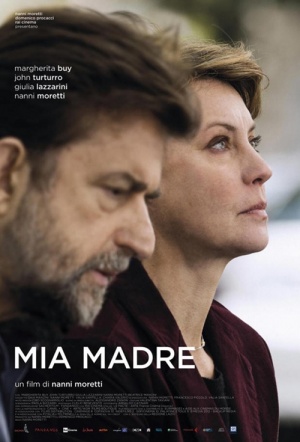 Italian drama, which enjoyed a nearly eight minute standing ovation at Cannes, about filmmaker Margherita (Margherita Buy). The director is making a film while dealing with personal and professional chaos - chief among them the imminent death of her mother and an egotistical American actor (John Turturro). Nominated for the Palme d'Or at Cannes 2015.

"Margherita is a director shooting a film with the famous American actor, Barry Huggins, who is quite a headache on set. Away from the shoot, Margherita tries to hold her life together, despite her mother’s illness and her daughter’s adolescence." (Cannes Film Festival)

Moretti's exploration of loss is unquestionably affecting, and "My Mother" has powerful moments ...

Turturro deserves four stars – but the rest of Moretti’s saggy melodrama is scarcely half as good.

A tremendously smart and enjoyable movie.

It's this primal bond between mother and daughter that is the heart of the film, one that Moretti explores with sympathy and restraint -- though in the end the focus is a little too diffuse.

It's hard not to at the very least admire Nanni Moretti's self-imposed remit as a filmmaker who locates humour and levity in life's dimmest corners.

Among the excellent principals, top-billed Turturro enlivens things wonderfully, but the real star, Buy, is magnificent.