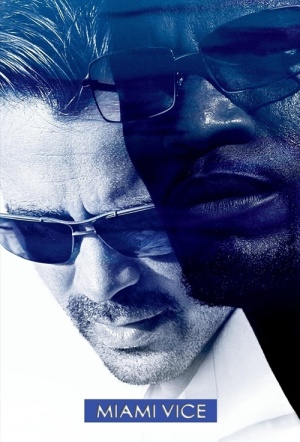 Loosely based on the iconic 80s TV show, and directed by the show’s producer, Michael Mann. Like his previous Collateral, Miami Vice is shot on digital video.

Film focuses on the darkside of undercover police work. Ricardo Tubbs (silky smooth Foxx) - "urban & dead smart", works undercover transporting drugs into Miami, attempting to identify a group responsible for 3 murders; and Sonny Crockett (fiery Irishman Farrell) - "charismatic & flirtatious", works with the supplier of the Miami group. As Crocket gets romantically involved with Isabella (Gong Li), the Chinese-Cuban wife of a drugs trafficker, the intensity of the case pull the policemen into dangerous territory – when the lines between their roles as cops and their fabricated identities start to blur.

If you're looking for a crime story that sizzles with action, sex and the visceral jolt of life on the edge, Miami Vice is the one...

It has its moments - usually involving guns - and, like Mann's Heat, its involves one epic shoot-em-up of the highest calibre...

Far from a disaster, but doesn't rank with Mann's best work...

Bearing all the Mann hallmarks, this is visually enthralling, relentlessly stylish crime drama. A little too languorous for its own good at times, but still vastly superior entertainment...

There are some striking visuals, as you'd expect from Mann, and a couple of nasty gun battles, but there are no surprises or tension and even the sleepiest viewer can predict exactly when someone's going to be kidnapped or something's going to explode.