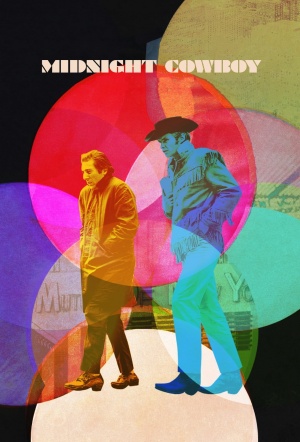 John Schlesinger's multi-award winning drama (including Best Film at the 1970 Oscars) set against the cynical end to the swinging '60s. Jon Voight is a confused and naive Texan who leaves his small-town and dead-end job for New York City, hoping to live the high life as a male prostitute. Struggling to get into the business, he partners with a hustler, the sickly Ratso Rizzo (Dustin Hoffman).

In this film the scenery is lovely and only the human race is vile.

Strip away everything else and it's the performances that make Midnight Cowboy what it is.

It is ultimately a moving experience that captures the quality of a time and a place. It's not a movie for the ages, but, having seen it, you won't ever again feel detached as you walk down West 42nd Street.

What has happened is that we've done our own editing job on it. We've forgotten the excesses and the detours, and remembered the purity of the central characters and the Voight and Hoffman performances.

Superb performances and a compelling script have made this film a strange mix of Oscar-winner and Cult Classic.