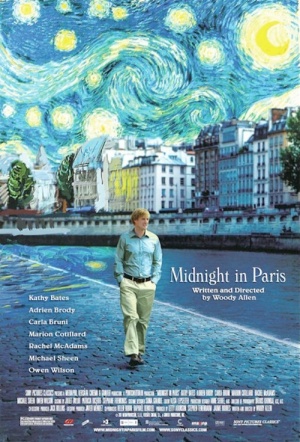 Soon to be married Gil (Wilson) and Inez (McAdams) are holidaying in Paris. While Inez spends her time fawning over her smug former boyfriend also on holiday (Sheen), Gil (Wilson) frets over his literary talents - he’s a screenwriter yearning to put his name on a novel and join the pantheon of great American writers of a bygone era. When out exploring by himself, Gil comes across a group of retro-dressed partygoers who beckon him to join them in a spot of time-travelling carousing. There he meets an A-list of literary giants who rubbed shoulders in 1920s Paris. Returning night after night, Gil relishes his new intellectual chums and grows increasingly annoyed at the seemingly shallow reality of life with his future wife and in-laws (Kurt Fuller and Mimi Kennedy).

Witty, featherlight and openly sentimental, this is Woody’s love letter to Paris and the most relaxed, likeable movie he’s made in years.

It is marvelously romantic, even though - or precisely because - it acknowledges the disappointment that shadows every genuine expression of romanticism.

Owen Wilson is a key to the movie's appeal. He makes Gil so sincere, so enthusiastic.

With Midnight in Paris, Allen has lightened up, allowed himself a treat and in the process created a gift for us and him.

Darius Khondji's cinematography evokes to the hilt the gorgeously inviting Paris of so many people's imaginations (while conveniently ignoring the rest), and the film has the concision and snappy pace of Allen's best work.

An unassuming wisp of a movie, Midnight In Paris finds Woody Allen penning a love letter to the City Of Lights, albeit one whose sentiments could easily fit on a postcard.