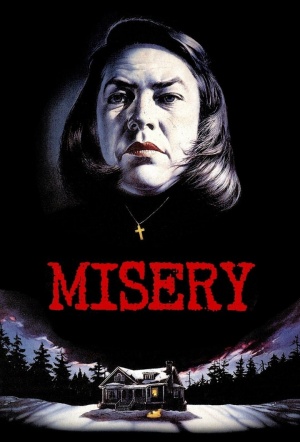 Kathy Bates won an Oscar for portraying a frighteningly obsessive fan of an author (James Caan) who happens to crash his car right next to her remote home. Unable to move, the author is nursed back to health by his "number one fan." But as the days go on, care turns into captivity, and adoration warps into abuse.

Reiner captures just the right level of physical tension, but for the most part wisely emphasises the mental duels. Terrific.

It maintains its tension well, plays enough tricks on us so that we don’t ever treat anything quite seriously and Goldman’s script has enough good lines and situations to keep one interested in exactly what is coming next.

It is a good story, a natural, and it grabs us. But just as there is almost no way to screw it up, so there's hardly any way to bring it above a certain level of inspiration.

There are a few holes in the plot, mainly towards the end, but from start to harrowing finish, it is blissfully apparent that Rob Reiner can indeed turn his hand to virtually anything.