Gorgeous animation with charming humour, held back by an uninspired plot

Missing Link is another flick by Laika Studios, the studio known for its original stop-motion animations, such as Coraline, ParaNorman, and Kubo and the Two Strings. At this point, you have to think that Laika Studios are the new Pixar; remember when Pixar made a huge stand about not making sequels and focusing on great original stories? That was at least until Disney acquired them and now they are pumping out Toy Story 4! Pixar may be claiming that they aren't making any more sequels, but I'll believe when I see it...or don't see it as it were.

I was greatly surprised by this film. When you look at the poster, it looks rather strange, and the trailer doesn't really provide that good a representation of what to expect with the film, so I did go into this with reasonably low expectations.

I was pleasantly surprised because I had completely forgotten what sort of animation to expect. Laika specialises in stop-motion animation, and when you realise that and simultaneously take note of the intricate levels of detail and the smoothness of movements, you can't help but be filled with wonder at the level of effort that was put into this. The rendering and character styles have almost a nostalgic Wallace and Gromit Aardman Animation style to it, but the scale and scope of this film blows it out of the park. Missing Link is an adventure story and it doesn't shy away from exploring a wide variety of environments and action scenes with some very impressive cinematography all around.

The cast are quite well done, and when you realise who the voices are, it makes sense as each character is very much their natural demeanour on screen. Hugh Jackman voices Sir Lionel Frost who is the cocky overconfident yet charming lead, Zach Galifianakis plays the titular character who is much like a fish-out-of-water, and new to the English language takes things literally. Zoe Saldana plays Adelina Fortnight plays Frost's old flame, who is ever sassy and does not take things lying down.

While most of the comedic elements are focused around Mr. Link and his inability to understand sarcasm, all of the main cast contribute to the comedy, bringing in a good balance of slapstick and physical humour alongside the miscommunication jokes. And like great family animated films there is a great deal of adult subtext that will appeal to the older audiences and go completely over the kids' heads.

Where the film does let the audience down, is the story. While the film is overall interesting, the villains are so cartoonish and one-dimensional that they are rather bland, and most scenes that include them cause the pacing to grind to a halt. Unfortunately, not even Stephen Fry voicing the character could bring any form of personality to the antagonist. Timothy Olyphant does a better job but is still incredibly repetitive.

The themes delved into with the film are much more interesting with two of the protagonists on a journey for acceptance, doing whatever it takes to fit into their respective chosen groups. but the basic story does prevent the characters from doing anything more than scratch the surface of the matter, and it has less of an emotional hook as a consequence.

Missing Link is warm, charming, and adventurous in the regards to not only the story type, but in animation too. The intricate set designs and the overwhelming variety of environments are a wonder to behold and makes up for the otherwise mediocre script. 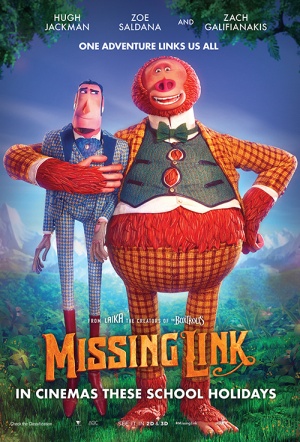