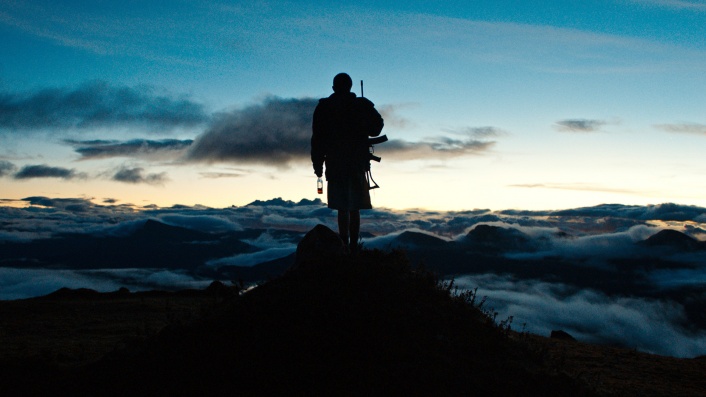 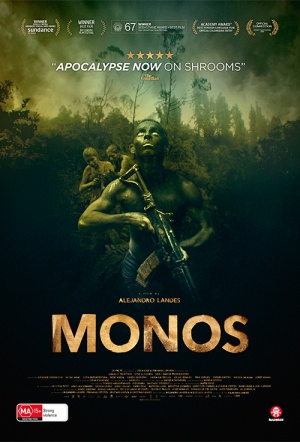 Eight kids with guns watch over a hostage and a conscripted milk cow on a faraway mountaintop in Alejandro Landes's award-winning drama.

"Belonging to a rebel group called 'the Organisation,' a ragtag band of child soldiers, brandishing guns and war names like Rambo, Wolf, Lady, and Bigfoot, occupies a derelict ruin atop a remote mountain where they train themselves, watch over a 'conscripted' milk cow, and hold hostage a kidnapped American engineer, Doctora (Julianne Nicholson, I, Tonya). But after an attack forces them to abandon their base, playtime is over for the motley young crew." (Sundance Film Festival)

At one level, Monos is a brutal, engrossing, superbly well-shot, well-scored and better-than-average thriller of child-soldiers at war.

Monos is one of the year's most extraordinary films. Its feverish visuals rupture any sense of surface realism, creating a disarming, almost surrealist universe where anarchy takes hold.

Monos, in its surreal power and persuasiveness, deserves to be called a sci-fi epic of the here and the now.

The performances from the young cast are vivid and utterly credible, yet the conspicuously metaphorical nature of the context eventually becomes wearisome.

There are allusions to William Golding's Lord of the Flies, but that fine novel, and Peter Brook's 1962 screen adaptation, though also elliptical, provided far more satisfying drama than Landes somewhat frustrating epic...

A gritty, jarring cinematic style, Monos is less likable than admirable, an achievement with a clear, apocalyptic vision.

There's a bicep-flexing quality to Landes's direction, with its bursts of colour and chaos, its conjuration of a surreal experience out of tactile reality. You tumble out of it bruised, bewildered, mesmerised.

Something between Apocalypse Now, Lord of the Flies and Embrace of the Serpent.

Even in this fictional context, the line between portraying and exploiting abused innocence gets uncomfortably, offensively blurred.