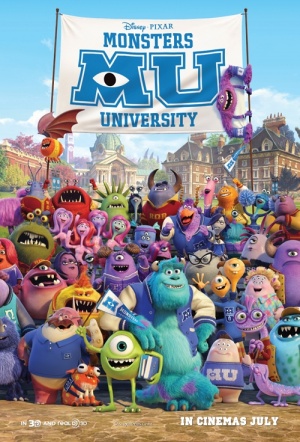 Disney/Pixar's prequel to Monsters, Inc. (2001) about one-eyed Mike and big Sully's rocky road to friendship after first meeting at university. Billy Crystal and John Goodman again voice the pair, joined by Steve Buscemi and freshmen to the series Helen Mirren and Charlie Day.

Inspired by seeing a professional in the act when he was a child, Mike devoted his schooling days to becoming a scarer, even though his stumpy appearance is anything but frightening. Determined to ace his first semester at Monsters University, he runs into Sully: a slacker who gets by on his monstrous frame and family reputation. When an incident puts the pair in hot water with the Dean, the duo are forced to work together in the annual Scare Games to avoid getting expelled.

This is director Dan Scalon's first animated film but he's a Disney man, co-directing short Mater and the Ghostlight and working as storyboard artist on features including Cars.

With Brave not living up to its many expectations and Cars 2 being straight-to-video rubbish (yeah, I said it), the prospect of another Monsters Inc. film came with its own set of fears. But despite the hefty pressure from pessimistic naysayers (myself included), Pixar has created a cinema rarity: a great prequel to a beloved property.

Zippy, bright-minded prequel scarcely needed to exist, yet makes for perfectly agreeable entertainment now that it does... Deals honestly and inventively with the hard reality that some talents can't be taught and some dreams remain unfulfilled.

Pixar falls back on the tried and tested in an entertaining caper that will be a surefire kid pleaser this summer. Old favourites are always welcome, but it would have been nice to see some more new ideas too.

If the film lacks the heartbreaking quality of Pixar's revolutionary best, there's no demerit in playing it solid and safe for a change.

Both the originality and stirring emotional complexity of "Monsters, Inc.," with its exquisitely painful and touching parallels with the human world, are missing ...

Mostly memorable for being fine but forgettable.

Dazzlingly clever and hugely funny, it succeeds both as a broadening of the Monsters universe and as a film in its own right. Monsters University had a tough task, and it’s passed with honours.