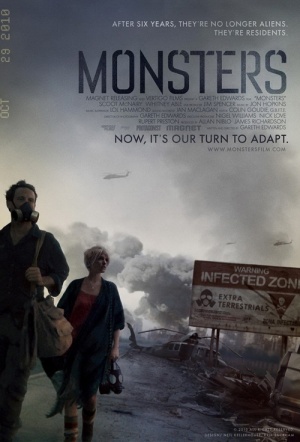 A British independent sci-fi thriller set six years after NASA discovered the possibility of alien life within our solar system. A probe was launched to collect samples, but crashed upon re-entry over Central America. Soon after, new life forms began to appear and grow. In an effort to stem the destruction that resulted, half of Mexico was quarantined as an 'Infected Zone'. Today, the American and Mexican military still struggle to contain the massive creatures.

The story begins when a jaded US journalist begrudgingly agrees to find his boss’ daughter, and escort her through the infected zone to the safety of the US border.

Monsters effortlessly compels. The ending may be pure sci-fi schmaltz, but it's schmaltz that this viewer, at least, could believe in.

Although the vérité aesthetics of Monsters will invite comparisons to Cloverfield and District 9, what galls most is the infuriating lack of purpose beyond its backdrop.

Although the tentative performances of his two human leads proves less satisfying, and the story's not-so-underlying sociological context can be hard to miss -- it takes place along the U.S.-Mexico border -- the overall picture still impresses.