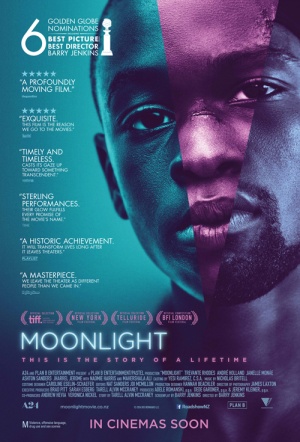 Going from childhood, to teenagehood, to adulthood, this winner of Best Picture at the Academy Awards follows an African-American man trying to understand himself and his sense of love in Miami's poorer district - a hard-skinned place that wants to predefine him.

The ability to evoke empathy and compassion from sound and images is a magic reserved for only great films. This is all Moonlight wants, and with the precision of a cinematic diamond cutter, filmmaker Barry Jenkins has crafted a great three-chapter chronicle of a soft-spoken black man named Chiron whose true self is constantly denied by the environment that engulfs him. The feeling is universal, and it was enough to turn this white-skinned, hetero, middle-class Irish Māori into a punctured bagpipe of wheezing emotion.

A socially conscious work of art as essential as it is insightful.

This film is, without a doubt, the reason we go to the movies: to understand, to come closer, to ache, hopefully with another.

A nuclear-fission-strength heartbreaker. It’s made up of moments so slight and incidental they’re sub-molecular – but they release enough heat and light to swallow whole cities at a stroke.

Moonlight is both a disarmingly, at times almost unbearably personal film and an urgent social document, a hard look at American reality and a poem written in light, music and vivid human faces.

It’s a thrilling, deeply necessary work that opens up a much-needed and rarely approached on-screen conversation about the nature of gay masculinity.

Moonlight, which announces Jenkins as a major filmmaker, gets you good. It stays raw from first scene to last.

Moonlight is an essential film and you'd be an idiot to overlook it.

Observes, with uncommon poignancy and emotional perceptiveness, his roughly two-decade path to find a definitive answer to the question, "Who am I?"