By Brendo
Could it be logical that we assume that Sherlock Holmes is infallible? I have. To me Sherlock has all the answers and has seen all the tricks, that is why this version of Conan Doyle's legendary detective can be confronting to the viewer who expects him to never fail.
Sir Ian McKellan gives an outstanding performance in his turn as the great man who has now found that very old age and a fast diminishing memory is catching up with him. McKellan's Sherlock is living on a country estate in beautiful Sussex just after the Second World War with his housekeeper, Mrs. Munro (Laura Linney) and her curious and intelligent son, Roger (Milo Parker). He spends a considerable amount of time attending to his Bee's and painstakingly trying to put together the fragments of his final case that forced his retirement some thirty years before. Laura Linney is wonderful as Sherlock's disgruntled housekeeper but the real kudos should go to young Milo Parker who stands up well against two very fine and seasoned actors. His portrayal of an inquisitive and persistent sidekick to the famous detective is quite brilliant, allowing Holmes to piece together the dim recollections of his final case.
The case unfolds in flashbacks whilst the man himself has to deal with his own mortality. Bill Condon does a fine job in allowing McKellan the freedom to slowly build his character and what it achieves is a very real Sherlock that hints at regret and loneliness that has washed upon him in his twilight years. The film can be a little slow at times as we watch Holmes struggle to come to grips with his worst enemy, that being himself. This though is a film for actors to act and each of the leads does a magnificent job to give the viewer a satisfying experience. 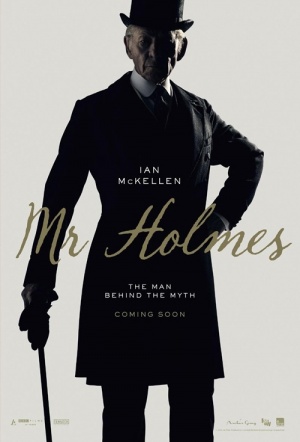