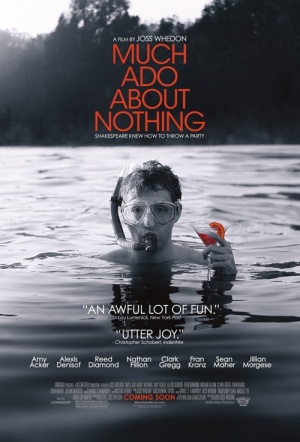 Leonato (Gregg), the governor of Messina, is visited by his friend Don Pedro (Diamond) who is returning from a victorious campaign against his rebellious brother Don John. Accompanying Don Pedro are two of his officers: Benedick and Claudio (Denisof and Kranz). While in Messina, Claudio falls for Leonato’s daughter Hero, while Benedick verbally spars with Beatrice (Acker), the governor’s niece. The budding love between Claudio and Hero prompts Don Pedro to arrange a marriage.

In the days leading up to the ceremony, Don Pedro, with the help of Leonato, Claudio and Hero, attempts to sport with Benedick and Beatrice in an effort to trick the two into falling in love. Meanwhile, the villainous Don John, with the help of his allies Conrade and Borachio, plots against the happy couple, using his own form of trickery to try to destroy the marriage before it begins. A series of comic and tragic events continue to keep the two couples from truly finding happiness, but then again perhaps love may prevail.

Much Ado has been done on the small screen several times, and cinema audiences were treated to a memorable traditional version with Kenneth Branagh and Emma Thompson in 1993. But none are as cool as this. Joss Whedon’s contemporary take on Shakespeare’s classic comedy, shot in black and white with a sexy vintage wardrobe, has a wit and style you won’t find in his kick-ass work for Buffy the Vampire Slayer, Firefly or The Avengers.

An inspired example of Shakespeare-on-a-shoestring.

A breezy but heartfelt Shakespear update that should put a smile on the faces of Whedon fans, Bard worshippers and anyone in the mood for a sharp, sassy romance.

The movie feels like too much of a lark. To paraphrase the play’s voice of reason, Friar Francis, it would be better if Whedon paused awhile and let his counsel sway us more.

From its very first scenes, Mr. Whedon's film crackles with a busy, slightly wayward energy that recalls the classic romantic sparring of the studio era.

But Whedon's key coup is in simply directing a very good version of the play. He's got a keen ear for comedy, a no-nonsense approach to ditching the gags that don't work, a deft hand for slapstick and an eagerness to use it.

Whedon, without skimping on the tale’s tragic undercurrents, has crafted an irresistible blend of mirth and malice.

A host of Whedon veterans puts on one of the funniest Shakespeare films in ages.

It will require no conspiring to make you fall for this one; Whedon and Shakespeare are a perfect match.

So kudos to the cast of Much Ado About Nothing, Joss Whedon’s scrappy, snappy take of one of Shakespeare’s greatest comedies. With little exception, the players assembled here — most of them veterans of the Whedonverse — pull off that difficult balancing act with gusto.