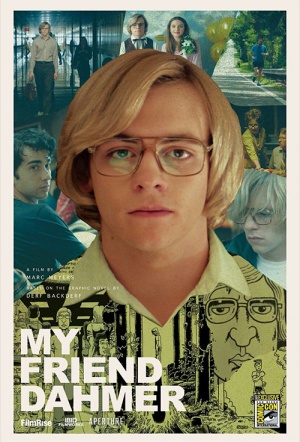 The origins of Jeffrey Dahmer as a serial killer are explored in this teen movie based on the recollections of a high school classmate.

"Before Jeffrey Dahmer became one of the most notorious serial killers of all time, he was a teenage loner. Conducting grisly experiments in a makeshift backyard lab, Jeff was invisible to most. That is until his increasingly bizarre behavior unexpectedly attracted friends. Based on the cult graphic novel, My Friend Dahmer chronicles the origins of the man. The monster. The high school senior." (Tribeca Film Festival)

[Ross] Lynch is opaque in the spookiest way.

It sees Jeffrey Dahmer for what he was: a young man who could express himself only through the most hideous violence. Yet it shows you that what he had to express was real.

This film is sensitively wrought. It's credible in its evocation of mid-'70s suburbia. The acting is excellent throughout, and Ross Lynch in the role of Dahmer elicits genuine sympathy for an increasingly lost but not yet monstrous soul.

Meyers's drama depends mostly on what it doesn't show you, and it works.

A warped wonder of a movie about a cannibalistic serial killer's awkward teenage years-it takes twisted to areas few have investigated.

The world may never tire of being fascinated with serial killers, but "My Friend Dahmer" avoids exploitation often enough to forge its own perceptive, tense, character-driven path.

My Friend Dahmer is one of the most disturbing coming-of-age features in memory. But it's also exceptionally moving.