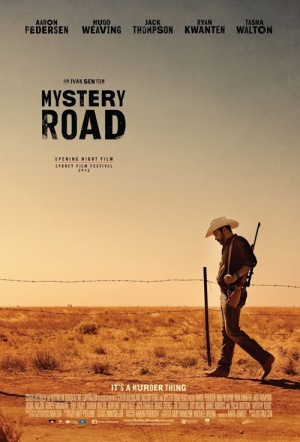 Slow-burning, modern-day western, centring on a police detective who returns to his hometown to undertake an investigation into the brutal murder of a teenage Aboriginal girl. The crime and the detective's presence bring the town's long-simmering racial tensions to the surface. Stars Aaron Pedersen, Jack Thompson and Hugo Weaving. From multi-talented Australian filmmaker Ivan Sen (Beneath Clouds, Toomelah) who serves as writer, director, editor, director of photography and composer.

"Set in the arid outback of Queensland, Mystery Road centres on Jay Swan (Aaron Pedersen), an Aboriginal police detective recently returned to his small hometown after a stint in the big city. When the body of a teenage Aboriginal girl is discovered, Jay is tasked with solving her murder. Both the violent crime and Jay's arrival unsettle the community, and Sen is unsentimental about revealing the harsh contrasts - white versus Aboriginal, past versus present, urban versus rural, poverty versus opportunity - that simmer within the town, isolated by mile after dusty mile of flat, red earth... a classically structured story about a lone hero fighting evil in his town - right up to the thrilling climax, an Australian version of Main Street at high noon." (Toronto International Film Festival)

An impressively crafted, immensely satisfying contempo thriller that astutely tackles the hot-button issue of tensions between indigenous and European Australians.

With a cast of entertaining outback characters, plenty of dry humour and stunning landscapes, the slow-burning murder-mystery had a warm reception at its world premiere when it opened the Sydney Film Festival.