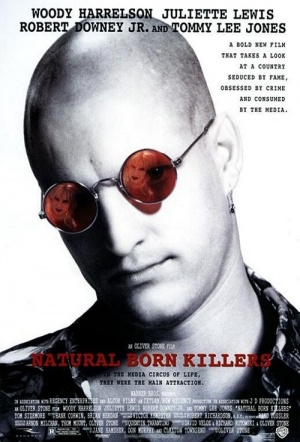 Oscar-winning director Oliver Stone (Platoon, JFK) gave his vision of the future with this 1994 crime drama starring Woody Harrelson and Juliette Lewis as love-struck serial killers, whose murderous actions are glorified by the media that interview the sole survivor of each slaughter. Based on an original story by Quentin Tarantino, co-starring Robert Downey Jr. and Tommy Lee Jones.

A heavy duty acid trip, quite possibly the most hallucinatory and anarchic picture made at a major Hollywood studio in at least 20 years.

Basically, the story is just a tarted up variation of the Badlands/Wild at Heart scenario, with ultra-broad swipes at media and authority figures tossed in for good measure.

Like all good satirists, he knows that too much realism will weaken his effect. He lets you know he's making a comedy. There's an over-the-top exuberance to the intricate crosscut editing and to the hyperactive camera.

Feverish, psychedelic, insanely bloody, the movie is unlike anything you've seen before.

It is difficult to describe NBK as "good entertainment" in any classical sense (non-existent plot, some dialogue is absurdly cliched) and Stone rams home his thesis very crudely.