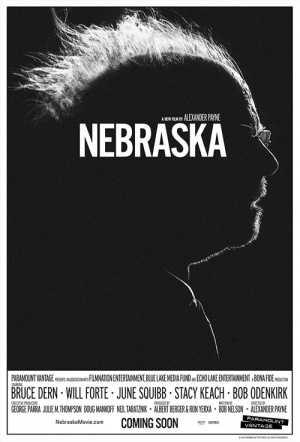 Alexander Payne (The Descendants, Election) directs Bruce Dern and Saturday Night Live’s Will Forte in this father-son comedy drama, shot in black and white. Follows the pair as they road trip from Montana to Nebraska in order to claim a million dollar sweepstakes prize the father believes he has won. Dern won Best Actor at Cannes 2013, the film was also Palme d'Or nominated.

"Frustrated by his increasing dementia, the father's family debates putting him into a nursing home - until one of his two sons finally offers to take his father by car to claim the prize, even as he realises the futility. En route the father is injured, and they rest a few days in the small decaying Nebraska town where the father was born and where, closely observed by the son, he re-encounters his past... the film blends professional actors with non-actors and aspires to mirror the mood and rhythms of its exotic locations." (Cannes Film Festival)

Low-key, wistful, and disarmingly droll, Alexander Payne’s father-son bonding tale Nebraska distils the best bits from his earlier films Sideways and About Schmidt and delivers something of a spiritual cousin to ‘70s-era road movies such as Wim Wenders’ King of the Road and Jerry Schatzberg’s Scarecrow.

A wistful ode to small-town Midwestern life and the quixotic dreams of stubborn old men.

A pitch-perfect performance from Dern graces Alexander Payne’s latest roadmovie – another bittersweet meditation on the sad, comic futility of life.

More than ever Payne allows the humour to rise up gently from his story rather than burst through it.

Hard times are part of the picture, and so are hard people.

Nebraska may not be startlingly new, and sometimes we can see the epiphanies looming up over the distant horizon; the tone is, moreover, lighter and more lenient than in earlier pictures like Sideways. But it is always funny and smart.

A charming road movie that develops into a full-blown study of life and roots, offering a beautiful insight into the way families migrate and change.