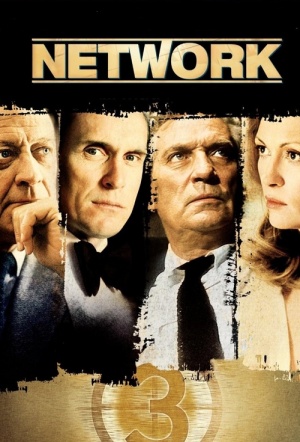 UBS is a plummeting American network, its news team forced to hand control over to the entertainment division. Howard Beale (Peter Finch), a formerly well-known broadcaster, is on his last legs, pressured out of his job by new network owners. As a final swan song, he delivers an elongated passive-aggressive rant on live television. In the wake of his deranged venting, Beale becomes a TV icon, one that the new UBS owners are dying to sell. Also stars Faye Dunaway and Robert Duvall, and features the classic line: "I'm mad as hell and I'm not going to take it anymore!"

Can be faulted both for going too far and not far enough, but it's also something that very few commercial films are these days. It's alive.

When Chayefsky created Howard Beale, could he have imagined Jerry Springer, Howard Stern and the World Wrestling Federation?

Typical of the cool intelligence of '70s American cinema.