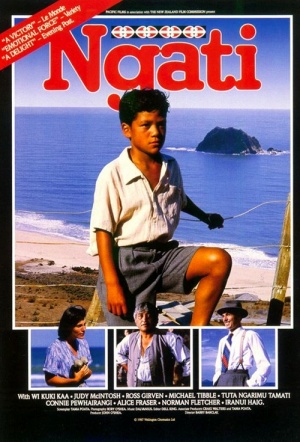 Set in and around the fictional town of Kapua in 1948, Ngati is a New Zealand drama and the story of a Maori community. Follows three narratives: a boy, Ropata, is dying of leukaemia; the return of a young Australian doctor, Greg, and his discovery that he has Maori heritage; and the fight to keep the local freezing works open. Shot in small communities from Tolaga Bay to Ruatoria on the East Coast of New Zealand, Ngati was the first feature to be written and directed by Maori. Screened in Critics' Week at Cannes 1988.

Says director Barry Barclay: "It's about being Maori - and that is political... political in the way it was made, a serious attempt to have Maori attitudes control the film. Political in having as many Maori as possible on it or being trained on it. Political in physically distributing the film or speaking about it and showing the film in our own way. Political in going in the face of a long tradition in the film industry here and abroad saying these simple things, without car chases or without a rape scene, actually have appeal. I think a lot of the political struggle is to get through to Pakehas and Pakeha institutions that this is the way we think, therefore change your manners. This is the Maori world, take it or leave it."

A deceptively simple low-budget feature that releases the miraculous essence of community strength and joy...

A deceptively simple low-budget feature that releases the miraculous essence of community strength and joy...