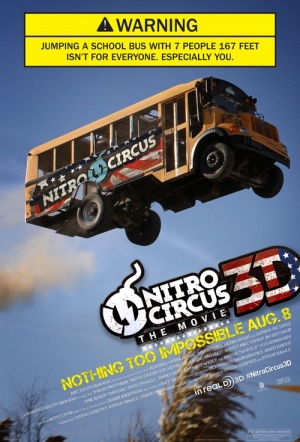 Travis Pastrana and the Nitro Circus - a crew of action sport stuntmen/idiots - bring their armada of absurdly awesome antics to the big screen. The Nitro Circus, a more extreme version of Jackass (this film is co-produced by Johnny Knoxville), has already spawned live shows and an MTV series.

Watching people take their lives into their hands shouldn't be as tedious as Nitro Circus: The Movie 3D.

When something that was originally slapdash and spontaneous becomes big business, part of the fun always seems to go out of it.

Remains firmly planted in the realm of the inarticulate dude-bro, where shirtless men gleefully engage in physical acts of self-inflicted pain without a trace of real self-awareness or understanding.