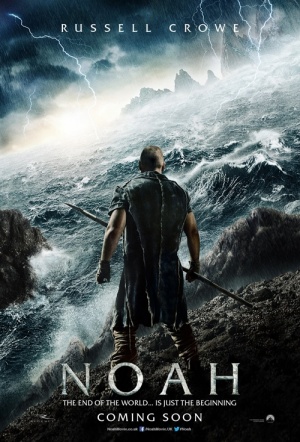 After visions foretelling the end of the world due to man's mistreatment of it, Noah (Russell Crowe) prepares for an apocalyptic flood by building an enormous ark. It will house the planet's wildlife as waters rise, but will the evil of man have any place in God's new world?  Co-stars Emma Watson, Jennifer Connelly, Ray Winstone and Anthony Hopkins. From filmmaker Darren Aronofsky (Black Swan).

One of the last in the line of Seth (Cain and Abel's lesser-known sibling), Noah helps his family exist in harmony with creation, even as the environment is destroyed around them by the greed of mankind. After a vision depicting a doomed, drowned world, Noah seeks the help of his grandfather Methuselah (Hopkins), who entrusts him with a seed from the Garden of Eden that quickly brings a vast forest into being. With this raw material, Noah begins the construction of a vast ask with the help of his family and the Watchers, fallen angels now confined to Earth. But desperate men and women, led by Tubal-cain (Winstone) prepare to take the Ark, and even as a vast flood descends across the planet, those aboard have no guarantee of safety.

The story by Aronofsky and John Logan (Skyfall, Gladiator) began life as a graphic novel published in 2011. Producer Scott Franklin told EW, "Noah is a very short section of the Bible with a lot of gaps, so we definitely had to take some creative expression in it. But I think we stayed very true to the story and didn't really deviate from the Bible, despite the six-armed angels."

I've always believed that in cinema, ambition must be celebrated – outsized ambition, especially so. That stance is being challenged like never before with Darren Aronofsky's Noah. The filmmaker's previous works have all demonstrated affection for the more operatic modes of filmic storytelling, and that carried me through 2006's The Fountain, which counts as an interesting failure. After reigning things in a little with The Wrestler and Black Swan, Aronofsky is back in his gargantuan sand box for Noah, and unlike The Fountain, there's never any sense that his vision has been compromised.

It is never less than fascinating — and sometimes dazzling — in its ambitions.

A wildly stupid, yet still train-wreck-fascinating piece of work.

A familiar story made newly poetic and strange with a flavour that’s less Genesis than Revelation.

What is so economical, and beautifully expressed, on the page can become a heavy, lumbering beast when translated into conventional narrative.

The laudable ambition makes it easy to forgive some rough patches.

Aronofsky wrestles one of scripture's most primal stories to the ground and extracts something vital and audacious.

Inventive, ambitious, brutal and beautiful: a potent mythological epic. But also willfully challenging, as likely to infuriate as inspire.