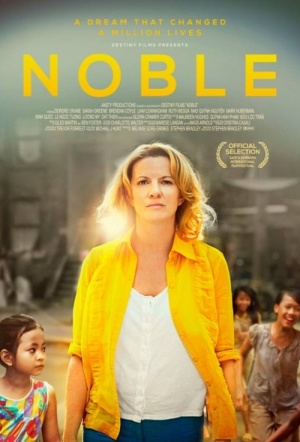 True story biopic on children's rights campaigner Christina Noble, an Irishwoman who was forced into homelessness as a teen when abandoned by her father. As an adult, her compassionate nature drove her to help nearly a million street-children and their families in Vietnam and Mongolia.

"After surviving an early life of poverty, abuse and other misfortunes, Dubliner Christina Noble (Deirdre O’Kane) finally finds her mission in life. Aghast at the images of the Vietnam War (and the subsequent vivid nightmares they inspire), this tenacious, devout woman travels to Ho Chi Minh City in order to establish a clinic and refuge intended to better the lot of street children and war orphans. Is the fighting spirit coursing through her Irish veins a match for widespread corruption and indifference that awaits her?

"Bradley’s biopic concerning this remarkable Irish charity worker has already scored a number of awards on the festival circuit. Built around a powerful central performance by O’Kane and boasting an array of well-known faces such as Brendan Coyle (Downton Abbey), Liam Cunningham (Game of Thrones) and Ruth Negga (12 Years a Slave) in supporting roles, it’s a truly inspiring film." (Vancouver International Film Festival)

The true story of Christina Noble, the Irishwoman who made it her mission to help the impoverished street children of Vietnam. Yes, it’s one of those uplifting, one-person-can-make-a-difference tales, so readily dismissed by cynical film critics like myself, our hearts hardened by years of Hollywood abuse.

Writer-director Stephen Bradley may make some missteps, but he capitalizes on this underdog story's inherent thrills.

A feisty, passionate performance by the Irish actress Deirdre O'Kane gives the inspirational biopic Noble a serrated edge of defiance and gumption.