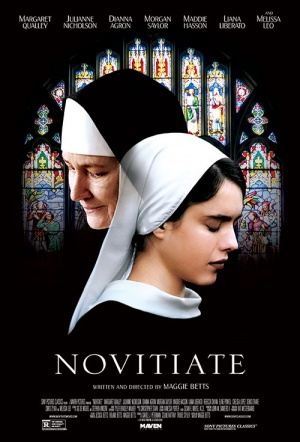 "Spanning the early 1950s through the mid-’60s, this coming-of-age story is about a young girl's first love. In this case, her first love is God. Raised by a deeply caring, non-religious mother, Cathleen (Qualley) is drawn to the heady mysticism of the lives of Catholic nuns and their undying romantic devotion to their chosen husband, Jesus Christ. She enrolls in a training program with The Sisters of Blessed Rose, a cloistered convent. As Cathleen progresses from the postulant to the novitiate levels of her tutelage, her faith is challenged by the harsh, often inhumane realities of being a nun, just as Pope John XXIII’s announcement of the Second Vatican Council threatens to alter the course of nuns’ lives forever." (Sundance Film Festival)

Betts has succeeded in capturing a watershed moment in the life of the Catholic Church - a push to adapt that is, in important ways, at odds with its very origins.

A piercing, immersive, and superbly played convent drama in which the suppression of speech is witnessed at both an individual and institutional level.

What's most interesting is the way Betts taps into the complicated semi-romantic dynamic between the nuns and Jesus, the man to whom they have dedicated themselves.

The tension Leo can generate simply by entering a room is extraordinary; the folds in her wimple look like extra neck tendons.

Mesmerises as it probes a uniquely female-dominated milieu where passions - both religious, sexual and a combination of the two - run hot under those starched, lily-white coifs and black habits.