NOW: In the Wings on a World Stage 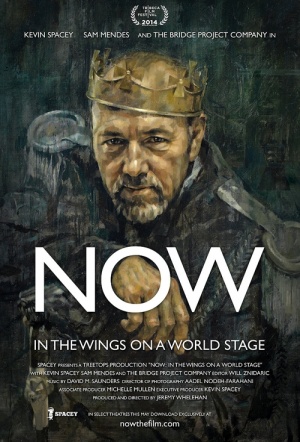 A behind-the-scenes look at the theatre production of Richard III, brought to the stage by actor Kevin Spacey, director Sam Mendes and the Bridge Project Company. Promises an intimate look at the creative process that led up to the production.

In over 200 performances, across 3 continents, Spacey and the troupe reveal moments behind the scenes of their staging of Shakespeare’s classic tragedy. Their story and experiences weave around, and reflect on, excerpts from the play from their various locations, from Epidaurus to Doha, and provide an opportunity to see Spacey's interpretation of Richard III.

NOW chronicles the first collaboration between Spacey and Mendes since both won Academy Awards for their work on American Beauty.

NOW: In the Wings on a World Stage / Reviews

Shamelessly partisan, Jeremy Whelehan's film combines thoughtful pontificating with rather too many tributes to Spacey's leadership and generosity.

In the end, celebrates a warm and particular type of family values.

As if screening filmed plays in cinemas wasn't perverse enough...

This engrossing documentary winds up being about nothing less than making one of Shakespeare's greatest works come alive through hard work...