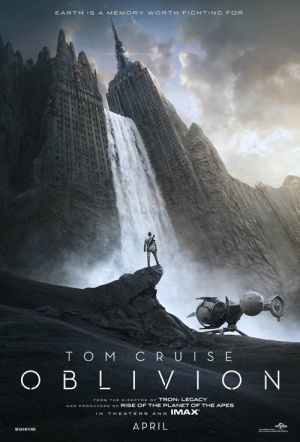 Tom Cruise is a sky-bound patroller of a desolate Earth who makes a world-changing discovery in this big-budget futuristic sci-fi, from the director of Tron: Legacy (adapting his own comic book). Co-stars  Morgan Freeman, Olga Kurylenko, Game of Thrones' Nikolaj Coster-Waldau.

Jack (Cruise) is one of the last few drone repairmen stationed on Earth. As part of a massive operation to extract vital resources after decades of war with a terrifying threat known as The Scavs, Jack’s mission is nearly complete. Patrolling the skies from thousands of feet above, he's brought crashing down when he rescues a stranger from a spacecraft. Her arrival triggers a chain of events that forces him to question everything he knows and puts the fate of humanity in his hands.

It’s not just Tom Cruise having flashbacks in Oblivion. Despite the film being something of a modern rarity - a big-budget sci-fi tale based on an original idea – Oblivion is as blatantly strewn with elements of other genre predecessors as its post-apocalyptic setting is with iconic New York landmarks.

A moderately clever dystopian mindbender with a gratifying human pulse, despite some questionable narrative developments along the way.

It isn’t a reboot or reimagining, refreshingly, but Oblivion plays like a stylised remix of superior sci-fi ground-breakers. Cruise and Kosinski: they might be an effective team, but pioneers they’re not.

Kosinski continues to lavish far more thought on how his elaborate fantasy worlds look than how they work, and neither the politics nor the human stakes here coalesce into rational or relatable drama.

Oblivion goes on for a long time, moving slowly and self-consciously, and it looks like a very expensive movie project that has been written and rewritten many times over. It is a shame: Cruise, Riseborough and Kurylenko as the last love triangle left on Planet Earth should have been quite interesting.

Oblivion is an absolutely gorgeous film dramatically caught between its aspirations for poetic romanticism and the demands of heavy sci-fi action.

Kosinski has again built a fantasy world that feels real to its core, but once more put most effort into the scenery and too little into the people.