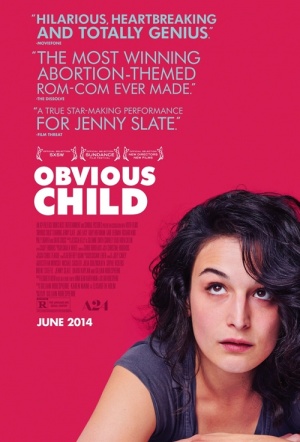 Comedy about a Brooklyn comedian, Donna, who suffers a trifecta of suck: she gets dumped, fired and pregnant just in time for Valentine’s Day. Described by Variety as "a romantic comedy that dares to consider the subject of abortion suitable for date-night crowds." Stars Jenny Slate (Parks and Recreations), Jake Lacy (The Office), Gaby Hoffmann (Crystal Fairy and the Magical Cactus) and David Cross (Arrested Development).

"Donna's unapologetically lewd, warmhearted wit is pretty irresistible with audiences. When she gets heartlessly “dumped up with” by her two-timing boyfriend, Donna plunges into some light stalking and heavy moping. Hitting a serious low point, she performs a dreary set of break-up vengeance and Holocaust jokes and drunkenly falls into bed with a nice young professional named Max - not remotely her type. A few weeks later, condoms be damned, she’s pregnant. Now Donna, incapable of telling anything but the naked truth when she’s on stage, will resort to any means to avoid telling Max the score. As her date with Planned Parenthood draws near, she must confront her doubts and fears like never before." (Sundance Film Festival)

Slate shines in a romantic comedy that dares to consider the subject of abortion suitable for date-night crowds.

Robespierre's admirably forthright romcom remains good-natured as it flies the flag for a woman's right to choose.

A well-realized, straight-ahead rom-com, one with the potential to reinvigorate a genre that's been flagging for decades.

This is a rare example of a film about a creative type in which the process of transforming life into art is shown plausibly and in some detail.

The sisterhood is here and seeing it at work, getting on with the business of living, is actually very moving.

Sharp, funny and feeling, this isn't just Juno-meets-Girls but a smart film that tackles real-life issues with rare frankness.