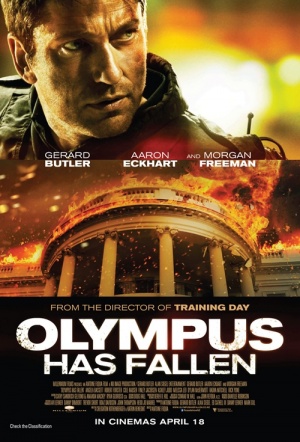 National security actioner from the director of Training Day, starring Gerard Butler as Mike Banning - a disgraced Presidential guard who finds himself trapped in the White House when terrorists capture the building and kidnap the President (Aaron Eckhart). Also stars Ashley Judd as Mrs President and Morgan Freeman as second-in-command.

When the White House (Secret Service Code: 'Olympus') is seized by the shadowy group, Banning gets trapped within the building. As the authorities scramble to respond, they are forced to rely on Banning's inside knowledge to help retake the White House, save the President, and avert a nationwide disaster.

There's an obvious drinking game in Olympus Has Fallen: take a swig every time a hoary action dialogue cliché is uttered by one of the characters - "I'm the best chance you've got!"; He's in the walls!"; "Those tunnels were sealed years ago!" and so on. You'll be soused by act II.

A North Korean terrorist may be responsible for taking the president hostage, but it’s Bulgarian-made CGI that does the most damage in Antoine Fuqua’s intense, ugly, White-House-under-siege actioner Olympus Has Fallen.

A deep supporting cast brings its A-game to the ridiculous dialogue.

A typical slab of Hollywood action in which the White House crumbles under attack, the American flag is tattered and tossed aside by baddies, and clichés rise like gods.

Generates a fair amount of tension and produces the kind of nationalistic outrage that rock-ribbed Americans will feel in their guts.

A grippingly brutal first act and strong cast can't stop this turning into a Steven Seagal film well before the end.

While Olympus Has Fallen breaks no major new ground in the political thriller genre, Fuqua has directed a sharp, very taut adventure that keeps you engrossed from start to finish.

The one and only consolation for audiences is that the end of the world would never, ever happen this way.