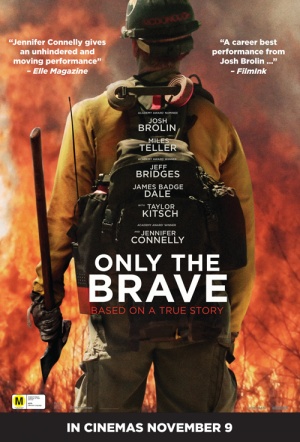 Miles Teller, Jennifer Connelly, Josh Brolin and Jeff Bridges star in this drama based on the true story of the 2013 Yarnell Fire in Arizona. From the director of Oblivion and TRON: Legacy, and bizarrely featuring a cast member named Forrest Fyre in a minor supporting role (no, we are not making this up).

In 2013, one of the most destructive wildfires in American history devastated Arizona. An elite crew of firefighters - the Granite Mountain Hotshots - heroically combatted the blaze, in what was the deadliest incident of any kind for U.S. firefighters since the terrorist attacks of September 11.

Only the Brave / Reviews

Director Joseph Kosinski follows up his sci-fi pics with the down-to-earth true story of the Granite Mountain Hotshots, a group of elite US firefighters who risked all to save their town. Think The Perfect Storm, only in a forest, and you’re in the ballpark for a drama jettisoning macho posturing and Hollywood heroics for a respectful, low-key approach.

A gripping and powerfully emotional portrait of yee-haw heroism, pitting a squad of cocky, calendar-purty white dudes against an adversary with no creed or colour, just an unquenchable appetite for destruction.

While aspects of the routine become mundane, it's the developing brotherhood amongst the men, and the sense of community around them, that ultimately strengthens this story.

This may not be a story of triumph, but it's inspiring nevertheless.

Only The Brave leaves a mark.

A corny but heartfelt look at devastating real-life story.

Tells its tale well enough, but ultimately it's the flames that move fastest.

A true-life drama with a sure sense of character and milieu, "Only the Brave" is a thoughtful, well-observed look at community, heroism and addiction.

It takes a very respectful view of the Granite Mountain Hotshots, with just the right emotional kick to leave an impression.

While "Only the Brave" is consistently involving and entertaining, [its] desire to be accurate about a heroic reality proves to be an at times awkward fit with the conventions of this kind of earnest and old-fashioned Hollywood film.

Only the Brave / Trailers